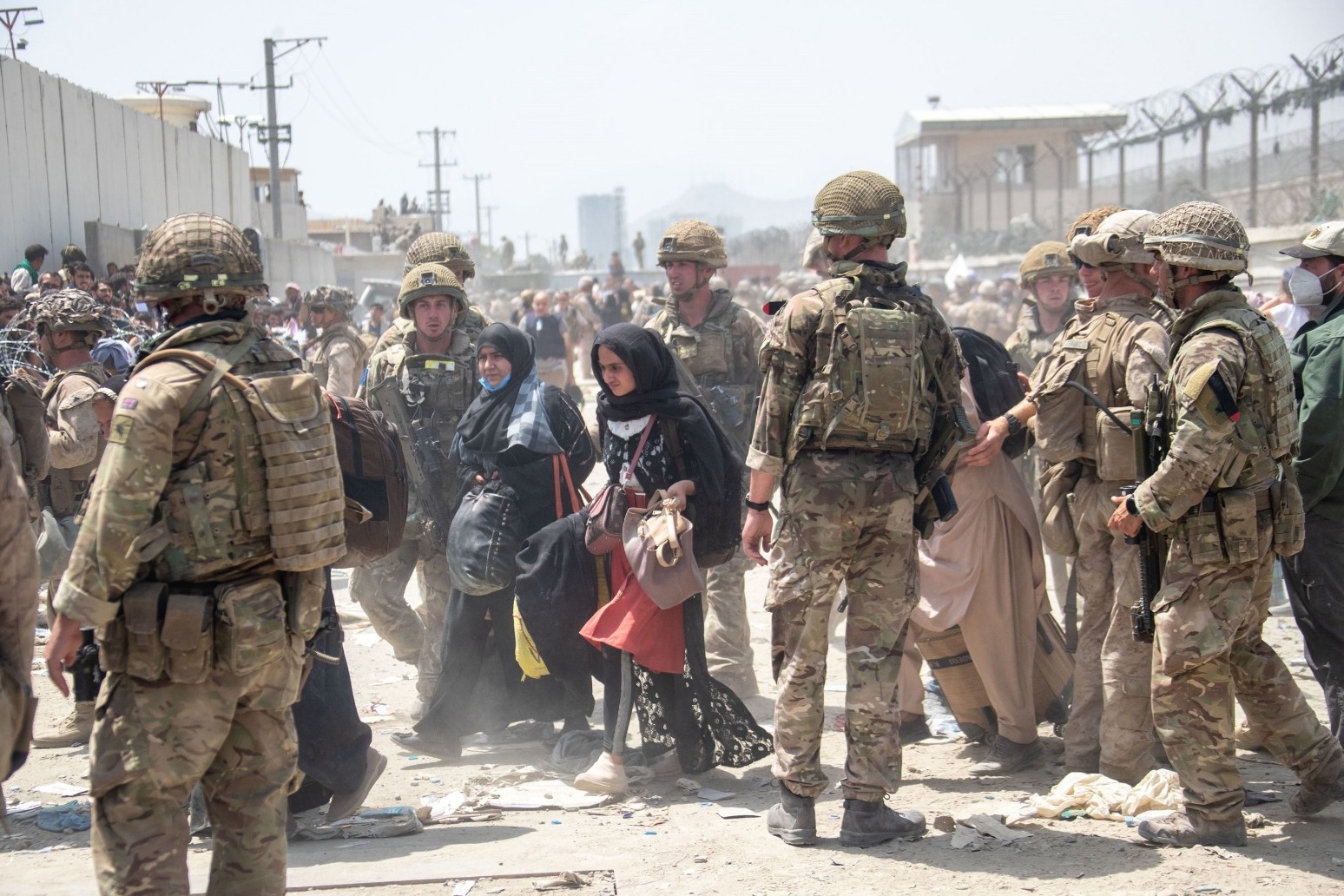 The UK will offer its “complete support” to the US if Joe Biden opts to extend the deadline for withdrawing troops from Afghanistan after the evacuation situation in Kabul worsened.

It comes as the Ministry of Defence (MoD) said seven Afghan civilians had died in the chaotic crowds outside the city’s international airport.

Defence Secretary Ben Wallace, in what is likely to be read as a plea to Washington, said “no nation will be able to get everyone out” of the Taliban-controlled country, with the US president’s August 31 target date making the rescue mission even more time pressured.

Writing for the Mail on Sunday, the Cabinet minister said: “If the US timetable remains, we have no time to lose to get the majority of the people waiting out.

“Perhaps the Americans will be permitted to stay longer, and they will have our complete support if they do.”

Relations between the UK and US are under strain, with former prime minister Tony Blair – who was in Downing Street when Britain sent troops into Afghanistan 20 years ago in the wake of 9/11 – accusing Mr Biden of deciding to pull out of the central Asian country with “little or no consultation”, branding the move “imbecilic”.

According to the Sunday Times, Foreign Secretary Dominic Raab – who is once again in the spotlight over his decision to remain on holiday as the Taliban advanced on Kabul – is seeking to speak to his opposite number, US Secretary of State Antony Blinken, to discuss extending the end-of-the-month deadline.

It comes as the situation around Kabul airport took a turn for the worse, with The Independent reporting that four Afghan women were crushed to death on Saturday as they sought to access the airfield where military repatriation flights are leaving from.

Mr Wallace confirmed there were “too many people in the airport” on Saturday, forcing the US side of the operation to suspend access.

A MoD spokeswoman stressed that neither UK flights nor processing were affected by the pause, however.

In a separate statement on Sunday, an MoD spokesperson confirmed the deaths of seven people in the airport’s crowds and added: “Conditions on the ground remain extremely challenging but we are doing everything we can to manage the situation as safely and securely as possible.”

There were further worrying reports about the treatment of Britons and Afghans who supported UK efforts in the country who are trying to escape.

Shadow foreign secretary Lisa Nandy shared a letter on social media that she had sent Mr Raab about the “crisis” facing evacuees, as she sought additional assistance for those on the ground.

The senior Opposition figure said Labour MPs had been hearing of people being “shot at, beaten and raped” while they wait to be called forward at the airport, while the Baron Hotel in the city, where many British nationals are being told to travel to for processing, is being blockaded by the Taliban.

Ms Nandy asked whether Nato allies could put in place a “military policing operation” at the gates of Hamid Karzai International Airport or within the internal processing zone to protect those waiting.

Meanwhile, the US embassy in Afghanistan recommended US citizens avoid travelling to Kabul airport “because of potential security threats outside the gates” being linked to the so-called Islamic State.

Sir Laurie Bristow, the British ambassador to Afghanistan who has stayed in the capital to help process applications, said the rescue effort was “without a doubt the biggest international challenge I have worked on as a diplomat”.

The Ministry of Defence confirmed that the Operation Pitting evacuation mission is being supported by 1,000 British troops – including Paras from 16 Air Assault Brigade – with nearly 4,000 people repatriated from Afghanistan since August 13.

In his article, the Defence Secretary appeared to recommend that any Afghans left behind once troops exit the country should head for the borders where “processing hubs across the region outside Afghanistan” will be set up for those who Britain has “an obligation to bring to this country”.

Back home, the Foreign Secretary was facing further revelations about his decision to remain on holiday in Crete while the Taliban circled Kabul, with claims he stayed abroad despite being told to return to the UK.

The Sunday Times reported that Mr Raab was ordered home from his trip by Downing Street on August 13 but stayed for two more days at his five-star hotel on the Greek island because Boris Johnson told him he could.

The newspaper quotes a senior government official as saying there was a “sense of disbelief” in No 10 when the Cabinet minister was not present in person for talks on Sunday, adding: “He seems to have nobbled Boris after he was told to come back.”

The Foreign Secretary returned to the UK on Monday after Kabul had fallen to the militants.

The Prime Minister has already had to give Mr Raab his backing once after he found himself in the firing line over his handling of the unfolding situation.

It emerged he delegated a call about repatriating Afghan interpreters, while away on August 13, to a junior minister – a decision that resulted in the phone conversation with the Afghan foreign minister not taking place and possibly delaying taking them to safety.

Responding to the latest holiday allegations, Labour’s Ms Nandy said: “It’s staggering that the Foreign Secretary found the time to pick up the phone to lobby the Prime Minister to extend his own holiday, but refused to call the Afghan government in the hours before Kabul fell to the Taliban.”

Ariana Grande has shared a glimpse at her married life with husband Dalton Gomez. The singing superstar, 28, married the Los Angeles real estate agent in a secret ceremony in May. The couple tied the knot in front of fewer than 20 people in an intimate ceremony in Montecito, California. Grande shared an insight into their domestic life as newlyweds on Instagram, including pictures of her cooking. Another shot shows […]