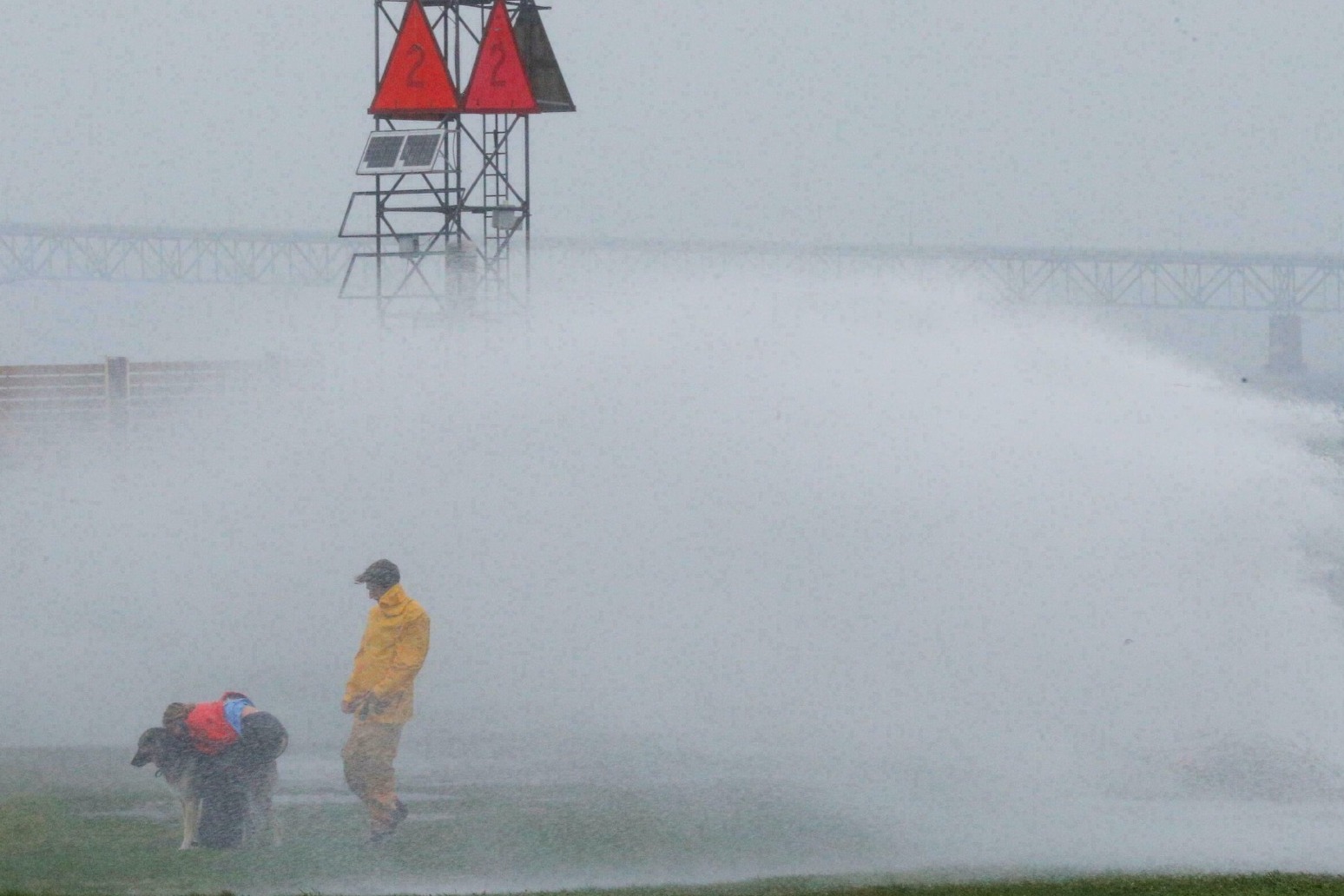 Tropical Storm Henri hit the coast of Rhode Island on Sunday afternoon, bringing high winds that knocked out power to tens of thousands of homes.

Tropical Storm Henri hit the coast of Rhode Island on Sunday afternoon, bringing high winds that knocked out power to tens of thousands of homes and bands of rain that led to flash flooding from New Jersey to Massachusetts.

The storm was downgraded from a hurricane to a tropical storm, but still had sustained winds of about 60mph and gusts of up to 70mph, according to the National Hurricane Centre.

There were few early reports of major damage due to wind or surf, but officials warned of the danger of spot flooding in inland areas over the next few days.

Millions of people in southern New England and New York are braced ready for the possibility of toppled trees, extended power cuts and flooding from a storm system that threatens to linger over the region well into Monday.

National Grid reported 74,000 customers without power in Rhode Island and more than 28,000 customers affected by cuts in Connecticut.

Several major bridges in Rhode Island, which connect much of the state, were briefly closed on Sunday, and some coastal roads were nearly impassable.

Westerly resident Collette Chisholm, 20, said the waves were much higher than normal, but that she was not concerned about her home suffering extensive damage.

“I love storms,” she said. “I think they’re exciting, as long as no-one gets hurt.”

In Newport, Paul and Cherie Saunders were riding out the storm in a home that her family has owned since the late 1950s. Their basement flooded with five feet of water during Superstorm Sandy nine years ago.

“This house has been through so many hurricanes and so many things have happened,” Ms Saunders, 68, said.

“We’re just going to wait and see what happens.”

Rhode Island has been hit by hurricanes and tropical storms periodically — including Superstorm Sandy in 2012, Irene in 2011 and Hurricane Bob in 1991.

The city of Providence sustained so much flooding damage from a hurricane in 1938 and Hurricane Carol in 1954 that it built a hurricane barrier in the 1960s to protect its city centre from storm surge.

That barrier, and newer gates built nearby, were closed on Sunday.

While the wind was significant in certain areas, experts warned that the storm’s biggest threat would be likely to come from storm surge and inland flooding, caused by what are expected to be heavy and sustained rains. Some of the highest rain totals were expected inland.

Some communities in central New Jersey were inundated with up to 20cm (8ins) of rain by midday on Sunday. In Jamesburg, television video footage showed flooded city centre streets and cars almost completely submerged.

In one of his final appearances as governor before he is set to step down on Monday over a sexual harassment scandal, New York Governor Andrew Cuomo said that with the threat to Long Island diminishing, the state’s primary concern were inland areas like the Hudson River Valley, north of New York City, which was forecast to get inches of rain over the next few days.

President Joe Biden declared disasters in much of the region, opening the purse strings for federal recovery aid.

New York has not had a direct hit from a powerful cyclone since Superstorm Sandy wreaked havoc in 2012. Some of the most important repairs from that storm have been completed, but many projects designed to protect against future storms remain unfinished.